The importance of rhythm in a play is sometimes overlooked. The passage of time is part of the experience of watching a play. Time on stage and real time pass differently, each at its own pace. A good dramatist pays as much attention to the rhythm of the whole play as to the rhythm of each line.

This was brought home to me in a recent production of Arthur Miller’s play, The Crucible, at the Royal Exchange Theatre in Manchester. Because the play is set in Massachusetts at the end of the seventeenth century and because the historical events with which the play deals have their own momentum, the audience is aware of moving from present to past, from their own time to a different time. From the very first line spoken on stage, language begins to create that awareness.

The minister, Reverend Parris, is praying over a girl lying on a bed, but his voice is low and indistinct. His slave, Tituba, enters unnoticed, watches anxiously for a few seconds, then says, “My Betty be hearty soon?” Parris shouts at her. “Out of here!” Tituba, backing away, says, “My Betty not goin’ die…” and Parris again shouts, “Out of my sight!”

The encounter serves several dramatic purposes to do with plot and character, but it has a musical purpose too. Tituba’s lines are lovely. Put them together and they form a short lyric, a two-line verse which could easily be sung.

My Betty be hearty soon
My Betty not goin’ die

Two lines of equal length in language which is innately musical, contrasting with Parris’s inarticulate mumbling and sudden outbursts, lay the foundation for a play in which the sounds of words, the patterns of speech, do more than anything else to create on stage a world which soon replaces the world the audience inhabited when they sat down. The effect is reinforced by the language in which all the characters speak, with its double negatives (‘he cannot discover no medicine for it in his books’) and grammatical constructions which, though correct, seem quaint (‘Let him look to medicine and put out all thought of unnatural causes here. There be none.’) Every other speech has the vigour of a spoken language which is still close to its roots.

But if you trafficked with spirits in the forest I must know it now, for surely my enemies will, and they will ruin me with it.

I cannot blink what I saw, Abigail, for my enemies will not blink it. I saw a dress lying on the grass.

She hates me, uncle, she must, for I would not be her slave. It’s a bitter woman, a lying, cold, snivelling woman, and I will not work for such a woman!

This is the language spoken by every character, with little or no distinction between them on the basis of social class or education. As a common language, it works like the poetry of Elizabethan drama to make individual lines part of the whole and transform dialogue between characters into duets.

Miller borrowed some of his lines from Longfellow’s dramatic poem Giles Corey of the Salem Farms. Longfellow’s Mary Walcott says:

She holds an image, and is pinching it
Between her fingers. Ah, she tortures me!
I see her face now. It is Goodwife Bishop!
Why does she torture me? I never harmed her.

And later, in court:

Look there! Look there!
I see a little bird, a yellow bird,
Perched on her finger; and it pecks at me.
Ah, it will tear my eyes out!

Miller’s play is not written in blank verse, but his lines have the natural rhythm of English speech which found its poetic form in the iambic pentameter.

Because it is my name! Because I cannot have another in my life! Because I lie and sign myself to lies! Because I am not worth the dust on the feet of them that hang! How may I live without my name? I have given you my soul; leave me my name!

What we call rhythm in poetry is generally called pace in drama. For The Crucible though and for Arthur Miller’s other plays (they all have their own linguistic character according to the time and place in which they are set) the internal structure of scenes, the way each builds to a climax, the ebb and flow of action across the play as a whole, rhythm seems the better word.

Act 2 is much shorter, building from a deceptively quiet beginning through a series of confrontations (Proctor v Elizabeth, Proctor v Hale, Proctor v Herrick), each with its own climax, to the short scene between Proctor and Mary Warren whose climax is also the climax of the act. The closing lines are spoken by Proctor, his hand round Mary’s throat ‘as though he would strangle her’, before he throws her to the floor:

Make your peace with it! Now Hell and Heaven grapple on our backs, and all our old pretence is ripped away – make your peace! It is a providence, and no great change; we are only what we always were, but naked now. Aye, naked! And the wind, God’s icy wind, will blow!

The tensions in Act 3 are controlled by a new character, Danforth, whose urbanity introduces a new note. There is even some humour in the exchanges between him and Giles Corey. The rhythm in this act is to do with balance, the balance of power. Danforth’s power is threatened. With the help of Abigail Williams, he holds onto it, but only just. The climax is chaos and confusion, Proctor accusing Danforth of ‘pulling down Heaven and raising up a whore,’ Hale shouting, ‘I denounce these proceedings, I quit this court’ and Danforth trying to assert his authority.

Act 4 is in a way, coming as it does after the trial is over, an anti-climax. Most of the accused women have been hanged, orphans and stray cows wander the streets, Abigail has absconded. The action now turns on whether or not John Proctor can be persuaded to confess to save his own life and Danforth’s reputation. The momentum, the growing tension, comes from Proctor’s struggles with his conscience. The climax comes when he signs the confession and then, seconds later, tears it up. Danforth orders Proctor’s immediate execution. The climax of the anti-climax is followed by another anti-climax. The stage quickly empties, leaving behind only Hale and Elizabeth. Hale begs her to persuade Proctor to change his mind:

Be his helper! – What profit him to bleed? Shall the dust praise him? Shall the worms declare his truth? Go to him, take his shame away!

Elizabeth, resolutely ignoring his plea, ‘supporting herself against collapse’, ends the play with a sudden cry:

He have his goodness now. God forbid I take it from him!

The last two lines, in their language and form, recall the first.

My Betty be hearty soon
My Betty not goin’ die

Rhythm is only one of the things that make The Crucible a great play, but it is what gives it its power and makes a performance like that at the Royal Exchange Theatre unforgettable. 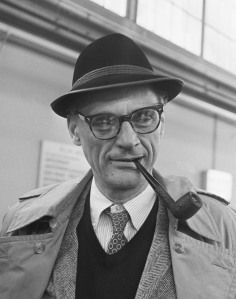 This entry was posted on November 11, 2015 by Neil Rathmell in Literature and tagged Arthur Miller, drama, Salem Witches, The Crucible.