How many narrators does it take to tell a story?

One story can be told in many different ways. The way in which it is told changes the story. So before you start to write your novel, you have to make (as politicians are fond of saying in case they get it wrong) some difficult choices.

Reading recently one of William Faulkner’s first great novels, As I Lay Dying, which was published in 1930, I began to think that, confronted by these difficult choices, he made the wrong one. He chose to let the characters tell the story and let his readers work out for themselves, from these different versions of the same story, what actually happened.

What actually happened was that Addie Bundren died and her husband, Anse, takes her to be buried in Jefferson, the town where she grew up. The children go with him. The town is only a few miles away but in order to get there they have to cross a river which has flooded. In fact, the whole state of Mississippi is flooded. But it was what she wanted and he made a promise and he is determined to keep it, come what may. He also needs some false teeth. It takes a long time, but they get there in the end, against all the odds and with serious harm to some members of the family, the smell of the corpse providing early warning of their arrival. Addie is buried and Anse gets his teeth. He also gets a new wife.

The story is told through numerous short interior monologues, mostly by members of the family, but also by the people they meet on the way. The result is a complex interweaving and overlaying of different perspectives. Our understanding of each character is a composite of other understandings. What we know of events is pieced together in the same way, inferred rather than known. Who do you trust? What Anse or Darl or Jewel or Vardaman or Dewey Dell say about themselves or what they say about each other? So far, so like life.

Faulkner was not the first novelist to use interior monologue. Novelists have always let us hear, in one way or another, what their characters are thinking. In the 19th century novelists told us what they were thinking, in the 20th century some of them – James Joyce, Virginia Woolf – let their characters think aloud. The idea was for the novelist to disappear from the novel altogether, leaving behind only real people living real lives. (But that, of course, is an illusion.)

Faulkner’s task was harder than Joyce’s or Woolf’s, both of whom wrote novels in which nothing or very little happens. The same is true of Beckett’s plays and of modernism in general. Beckett, Joyce and Woolf dispensed altogether with plot and replaced it with existence. The interior monologues of the novelists are the speeches in Beckett’s plays (until the plays became shorter and speech became silence).

By contrast, a lot happens in As I Lay Dying. Anse has a promise to keep and teeth to buy, Cash has a coffin to make, a team of mules has to be found to pull the cart, a river in flood has to be crossed, drowning mules and men have to be rescued, old rivalries and resentments have to be confronted. Faulkner’s interior monologues have a story to tell. His world, unlike the world of Joyce and Woolf, has a narrative. His characters don’t just think, they tell stories. Take Darl, for example, who begins the novel.

Jewel and I come up from the field, following the path in single file. Although I am fifteen feet ahead of him, anyone watching us from the cotton-house can see Jewel’s frayed and broken straw hat a full head above my own.

He goes on describing the path and the fields, almost as if he were a novelist himself. The cotton-house ‘leans in empty and shimmering dilapidation in the sunlight’, the planks that Cash is using to make the coffin ‘are yellow as gold, like soft gold, bearing on their flanks in smooth undulations the marks of the adze blade’. Darl is the poet of the family. That anyway is the voice Faulkner gives him. The rest of the family just think he is strange.

Others, Tull for example, stand in for Faulkner as narrators.

Now and then a fellow gets to thinking about it. Not often, though. Which is a good thing. For the Lord aimed for him to do and not to spend too much time thinking, because his brain it’s like a piece of machinery: it won’t stand a whole lot of racking. It’s best when it all runs along the same, doing the dat’s work and not no one part used no more than needful. I have said and I say again, that’s ever living thing the matter with Darl: he just thinks by himself too much.

Tull gets his narrative style from Huckleberry Finn.

Well, I catched my breath and most fainted. Shut up on a wreck with such a gang as that! But it warn’t no time to be sentimentering. We’d got to find that boat, now – had to have it for ourselves. So we went a-quaking and shaking down the stabboard side, and slow work it was too – seemed a week before we got to the stern. No sign of a boat. Jim said he didn’t believe he could go any further – so scared he hadn’t hardly any strength left, he said. But I said come on, if we get left on this wreck, we are in a fix, sure.

What if Faulkner had ignored the siren call of Virginia Woolf, turned his back on modernism and written like Mark Twain? An English reader misses a lot through not being able to hear the voices in their proper Mississippi accents, and that too is an indication that there is more of Twain than Woolf in Faulkner. His characters don’t just think, they talk. They don’t just exist, they do things. He is the kind of novelist who enjoys narrative, who can’t resist, for example, giving Anse the last laugh, a last twist of the plot, when the others see him walking towards them with his new teeth and his new wife.

“It’s Cash and Jewel and Vardaman and Dewey Dell,” pa says, kind of hangdog and proud too, with his teeth and all, even if he wouldn’t look at us. “Meet Mrs Bundren,” he says.

You wouldn’t get a joke like that from Virginia Woolf. 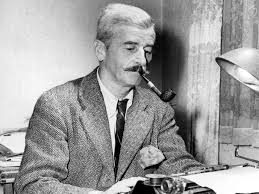 A new daily serial, ‘The Romeo and Juliet of Punjab’, my re-telling of the greatest of all Indian love stories, ‘Heer Ranjha’, will begin on Wednesday 6 May and run for fifteen days.

This entry was posted on April 29, 2015 by Neil Rathmell in Literature and tagged As I Lay Dying, interior monologue, Mark Twain, modernism, Virginia Woolf, William Faulkner.