I have just read in quick succession two books by Chester Himes, an author whose name was vaguely familiar to me but whose novels I had never read. One was A Rage in Harlem, the first of the Chandler-esque novels that made him famous, the other If He Hollers Let Him Go, his first published novel, which got him a job writing screenplays for Warner Bros and then the sack when Jack Warner said, “I don’t want no niggers on this lot,” which is more or less what the novels are about.

Perhaps because it has nothing of Chandler in it, coming entirely from Himes’s own experience of racial prejudice in 1940s America, If He Hollers Let Him Go moved me most. If he had written nothing else he would deserve to hold the same place in American literature as Emily Brontë does in English or Alessandro Manzoni in Italian. It is difficult to see how it could be improved (though I’m sure a modern editor would think of something).

The narrative is a simple ‘day-in-the-life’ extended to five days, each of which begins with a dream told in matter-of-fact style with only the briefest transition from dream to waking. This is the beginning and end of the first dream and the transition that follows:

I dreamed a fellow asked me if I wanted a dog and I said yeah, I’d like to have a dog and he went off and came back with a little black dog with stiff black gold-tipped hair and sad eyes that looked something like a wire-haired terrier.

I didn’t mind their not giving me the job, but their laughing at me hurt. I felt small and humiliated and desperate, looking at the two big white men laughing at me.

Suddenly I came awake. For a time I lay there without thought, suspended in a vacancy. There was no meaning to anything; I didn’t even remember having dreamed.

This is the closest he comes to any kind of literary artifice or formal structure and it is just enough to provide a framework for a first person narrative, the shape of which is determined otherwise only by events and the narrator’s response to them. In the days and nights book-ended by the dreams, Bob Jones experiences and expresses every shade of white and black America’s feelings towards each other. At the beginning of the book, Bob is the beneficiary of America’s need to recruit black workers for the war effort. By the end, he is facing thirty years in the penitentiary for rape. From the start, knowing that when the war is over so will be white America’s temporary racial truce, he is full of anger.

One of the ways he releases it is by racing his new Buick on the morning drive to work.

It was a bright June morning. The sun was already high. If I’d been a white boy I might have enjoyed the scramble in the early morning sun, the tight competition for a twenty-foot lead on a thirty-mile highway. But to me it was racial… all I wanted in the world was to push my Buick Roadmaster over some peckerwood’s face.

For the first time (outside the blues) a black man was writing about his own experience. Before Chester Himes, white authors did it for them. None of them, neither Harriet Beecher Stowe in Uncle Tom’s Cabin nor Mark Twain in Huckleberry Finn, would have dreamed of making their hero someone as violent, as lustful, as emotional, as intelligent, as real as Bob Jones.

When a white girl comes into a black bar with two white boys and things start to get uncomfortable, the manager asks them to leave. The girl objects but the boys, young soldiers, don’t want any trouble.

‘Aw, come on,’ the soldier said, getting red. ‘Let’s get out this nigger joint.’ I don’t think he meant to say it, but after he’d said it he got defiant. Where before there had just been race, now there was tension. We could call ourselves nigger all we wanted, but when the white folks did it we wanted to fight.

What we now refer to only as ‘the n word’ is very common in Himes’s novel, usually in conversation, mainly between black people. On those grounds alone, as his narrator says, it is a novel that could not have been written – and still could not be written – by a white novelist unless he wanted to started a fight, which makes it a very unusual novel and one I am sorry not to have read until now.

Racking my brains for something to compare it to, all I can think of is Untouchable, Mulk Raj Anand’s day-in-the-life novel about a member of the lowest Hindu caste. But Anand himself was high caste, a Cambridge graduate and wrote his novel in the third person. Beginning with a description of the place where Bakha, a day in whose life he is about to recount, he writes: ‘There lived the scavengers, the leather-workers, the washermen, the barbers, the water-carriers, the grass-cutters and other outcastes from Hindu society.’ E.M.Forster, in his introduction to the 1940 Penguin edition, writes: ‘Untouchable could only have been written by an Indian, and by an Indian who observed from the outside. No European, however sympathetic, could have created the character of Bakha, because he would not have known enough about his troubles. And no Untouchable could have written the book, because he would have been involved in indignation and self-pity.’

Untouchable is a very good novel and one that I would recommend anyone to read, except perhaps an Untouchable. To suggest, as Forster does, that objectivity is what we want in literature, rather than the unadulterated passion of subjective experience, tells us more about him (read Maurice) than it does about literature. Indignation and (wholly justified) self-pity is what makes If He Hollers Let Him Go such a great book.

A Rage in Harlem is a great book too, but by the time he wrote it Chester Himes, like a number of other black American writers, among them James Baldwin, was living in Paris and writing for an audience. He had a publisher and was his own editor. He wrote in the third person. He had a style which he borrowed from Raymond Chandler and adapted to his own purposes.

Jackson was a short, black, fat man with purple-red gums and pearly white teeth made for laughing, but Jackson wasn’t laughing.

Imabelle was Jackson’s woman. She was a cushion-lipped, hot-bodied, banana-skin chick with the speckled-brown eyes of a teaser and the high-arched, ball-bearing hips of a natural born ‘amante’. Jackson was as crazy about her as moose for doe.

His achievement was to make crime fiction surreal and to use it for the subversive purpose of fomenting revolution in America. ‘I thought I was writing realism,’ he said. ‘It never occurred to me that I was writing absurdity. Realism and absurdity are so similar in the lives of American blacks one cannot tell the difference.’ He was Martin Luther King’s fool, writing the kind of books that Feste would have written if he had been what Malvolio would have called a n****r and Olivia would have kept on her staff to show how tolerant and enlightened she was. 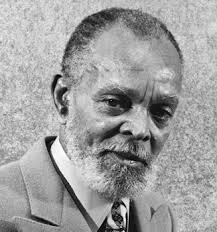 My next post, on 18 February, will be about Guantanamo Diary by Mohamedou Ould Slahi.

My next Reader’s Diary will be posted on 25 February.

This entry was posted on February 11, 2015 by Neil Rathmell in Literature and tagged A Rage in Harlem, Chester Himes, crime fiction, E.M.Forster, If He Hollers Let Him Go, Mulk Raj Anand, Untouchables.